The National Institute of Educational Testing Service (Public Organization) hosted a meeting and workshop on Thursday 15th June 2017 concerning N-NET examination of 2017 academic year at Richmond Style Convention Hotel, Nonthaburi Province. More than 150 people participated in the program. Directors and representatives of the Office of the Non-Formal and Informal Education from 76 provinces across Thailand and in Bangkok area attended the event. They will administer N-NET examination for 77 testing centers throughout the nation.

Associate Professor Dr. Samphan Phanphruk, the director of NIETS, presided over the meeting and spoke on “The Standardization of N-NET.” He emphasized on the five standards of NIETS: they are 1) test development standard; 2) test administration standard; 3) test printing standard; 4) test report and test result standard; and 5) testing personnel standard. In addition, he suggested the benefit of N-NET score that it can be applied for the improvement of learning and teaching as follows:

3) Educational executive level — consideration of N-NET results as a guideline to improve teaching and learning as well as for school assessment.

4) Provincial level — Office of the Non-Formal and Informal Education of each province (77 provinces in Thailand) can use the score to improve methods of teaching and learning as well as educational quality assurance.

The director also reemphasized on strictly enforcing rules and regulation as well as conducting oneself according to the manual of administering national examination to prevent any controversy of testing administration. Following the instruction in the manual would increase the public confidence toward the organization, and regulation and standard should be held the same throughout all testing centers.

Participants had an opportunity to share their concerns and suggestions. These comments, of course, are beneficial to the improvement. Mr. Patana Thanakorn, Head of Testing Administration Department, gave an overview of last year administration of N-NET and the result was satisfied. Things has been according to the manual. There was no misconduct of both staff and test takers. He, therefore, reemphasized all staff administering the test is to strictly follow the rule and regulation in the manual. Schools and educational institutes should recheck graduating student names of each academic year before sending the completed list to NIETS. 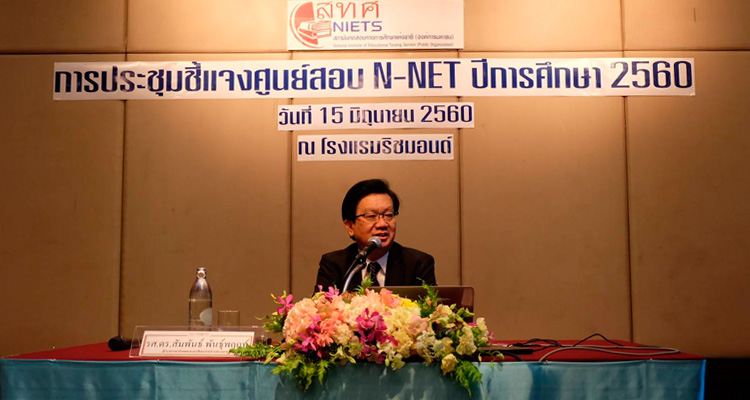